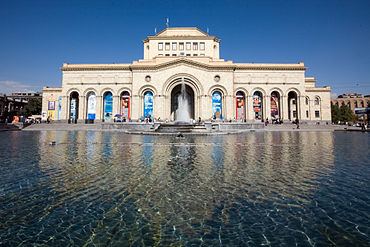 The History Museum of Armenia was founded in 1919 by the Parliament Law of the First Republic of Armenia. The museum was formed on the basis of the collections of the Armenian Ethnographical Association of the Caucasus, Nor Nakhijevan Museum of Armenian Antiquities, Museum of Antiquities of Ani, Vagharshapat Repository of Ancient Manuscripts. The History Museum of Armenia is entrusted with a national collection of c. 400,000 objects. Histoy Museum presents the rare traces of cultural interrelations of the Armenian Highland and the countries of the Ancient East (Egypt, Mitany, the Hittite Kingdom, Assyria, Iran, the Seleucid State), Rome and the Byzantine Empire. Possesses the sumptuous historical-cultural heritage of Urartu, The Kingdom of Van, the powerful state in the Ancient East: exceptional cuneiform inscriptions, bronze statuettes, wall-paintings, painted ceramics, arms and weapons with sculptural ornamentation, unique specimens of gold, silver and bone, excavated from Teishebaini, Erebuni and Argishtikhinili.

The History Museum of Armenia has an experience of working with local volunteers, as students from different Armenian universities take part in different events to help the staff to organize meetings, museum holidays and special programs. The volunteer will assist the staff of the History Museum of Armenia, who does not always have enough capacity to run different activities and participate in the promotion of their activities. This will allow the staff to collect visitors’ feedbacks which will be helpful in the development of the museum's future. The museum needs creative volunteer to help to organize the events at the Museum. The main aim of the project is to work with the visitor of The History Museum of Armenia. The volunteer will work with the local community. Apart from working with clients of different age groups, he/she will have the possibility to spend his/her free time with them and to learn a lot about Armenia. The objectives of the project are therefore in line with those of the Erasmus+ Programme and aim to have a valuable input in the further development of the volunteer and concerned organizations.

The volunteer will work 5 days per week (approx. 35 hours) and will have weekends off. The working hours will be 11:00-17:30/18:30 in History Museum, including 1 hour for lunch. Twice a week the volunteer will attend Armenian language lessons in a Language Centre designed for the foreigners learning Armenian. Any initiative taken by the volunteer will be highly appreciated, besides the volunteer will be gladly involved in any activity of History Museum of Armenia as he/she wishes. The tasks delegated to the volunteer will cover such areas as: 1) Assist the staff and admin-staff of the History Museum of Armenia: Volunteer once a week will participate in a well-regarded program for children which are managed by the HMA’s Education department. Volunteer responsibilities include assisting a teacher to conduct curriculum-based art and history workshops. 2) Assistance staff to collect visitors’ feedbacks which will be helpful in the development of the museum's future; 3) Volunteer assists staff in defining positions, drafting consistent position descriptions, and completing the interview process; 4) Support and active participation in conferences, meetings, and the promotion activities organized by History Museum of Armenia; 5) organize the events planning at the Museum; 6) The volunteer will help the stuff to organize events as logistics, conferences, forums, presentations, also preparations International Museum day, European night of Museums; Support and training will be provided by the staff of the organization and by the community. The volunteer will be invited to social events and will be supported in learning and practicing basic Armenian language to be able to communicate more freely.

Thank you for your interest in doing your ESC in Armenia. The Receiving Organisations supported by HUJ deal with the vulnerable social groups (children with fewer opportunities, national minorities) and are eager to host a volunteer for a long-term project (6-12 months) The organisations are as follows : - Yerevan Special School N 14, Yerevan - Zvarntots Cathedral, near from Yerevan - Republican Paediatric Rehabilitation Centre, Yerevan - National Botanical Garden, Yerevan - Huysi Avan, Yerevan